This year, the Midland Area Santa House will be opening on November 27, 2021, kicking off the season with a return of Santa’s arrival and the Santa House Lighting.

The Santa House, located at the corner of M-20 and Main Street, is a holiday staple in the Midland community. The present house was built in 1987, with assistance from the Midland Area Community Foundation (MACF) and generous donors. It continues to operate annually, thanks to the donation of time from volunteers and to endowed funds held at MACF that support the yearly operation of the house.

As in past years, volunteers will be called upon to facilitate visits with Santa by stepping into the role of, “elf.” Volunteers who would like to help assist with Santa excursions and the Northern Star Train will be surrounded by all the wonders of the Santa House for three-hour timeslots.

“The individuals who graciously donate their time are a key component of operating the Santa House,” said Sharon Mortensen, President, and CEO of the Midland Area Community Foundation.

Those seeking to volunteer and help offer the Santa House experience can visit midlandfoundation.org/santahouse or call 989-839-9661 to sign up for a time slot.

The Midland Area Community Foundation is following CDC guidelines and actively consulting with the County of Midland Health Department. All Santa House visits are subject to change based on current local, state, and national guidance. The health and safety of Santa, visitors, and volunteers are a top priority for Midland Area Community Foundation. The Midland Santa House is located on the corner of Main St. and M-20 in Downtown Midland. If you’re looking up directions from a GPS, we are directly across the street from the First United Methodist Church. The Northern Star Train will be operational throughout the Santa House season, except for December 2-3.

When operational, The Northern Star Train provides tours of downtown Midland during the Santa House season. The train takes from the Midland County Courthouse (Main St.) and takes a 10-15 minute trip before safely bringing passengers back to the courthouse. Volunteers are needed throughout the month of December for the Santa House and the Northern Star Train. Shifts are 3 hours each. To sign up, please contact Laura Dittenber at 989.839.9661 or email info@midlandfoundation.org. The Courthouse Lighting will be taking place in 2021.

It’s a magical evening each year when the lights go on in front of Midland’s courthouse and, for many children and adults, the holidays begin! Every year the courthouse lighting heralds Santa’s arrival and the opening of his house for visitors young and old alike.

Santa will be making his way over the Tridge at 6 PM on November 27. Following Santa’s arrival will be the lighting of the Courthouse and Santa House.

The tradition began in the 1930s when Mrs. Herbert H. Dow made sure that small trees decorated with many tiny lights were placed around the Midland County Courthouse each Christmas season. According to those who remember, it was truly a lovely sight.

Today the Midland Area Community Foundation continues the tradition by sponsoring, with earnings from the Gilbert and Eleanor Currie Christmas Lighting/Santa House Endowment Fund, the seasonal displays and the Santa House. Working in close cooperation with Midland County, the City of Midland, and numerous volunteers, the Foundation offers this experience as a gift to the people of the Midland area.

Before World War II (1941), the courthouse was a great deal smaller and Main Street considerably less populated. No large Methodist Church stood across the street. During those years, Mrs. Dow arranged for a display each season.

During the war years there were no lights. Beginning in the late 1940s, Gil Currie and his friend Bob Wilson, who owned a business across the street, decided it was time for a holiday display once again. Gil and Bob, men who were still children at heart, loved Christmas lights and worked to establish a tradition which is still enjoyed today.

By the 1950s, Main Street had changed and the courthouse expanded to its present size. Something unique was needed. Wally Bronner of Frankenmuth helped develop the ideas and sketched out a plan.

There were many amusing tales surrounding the creating of the first displays – the time it took three trips to the forest and three trees before one was perfect enough for the center of the “traditional” section; the building of the first gingerbread house using the Currie children’s toys; and the live deer that needed companionship during the night to keep them happy. Working quietly behind the scenes was Floyd Wenglikowski who sustained the glow of lights and maintained the displays.

When the lights are turned on and the children’s happy faces glow with excitement, the project is worth the hours of planning and effort. Enjoyment for the children has always been the projects main goal. The present Santa House was built in 1987, thanks to the Midland Area Community Foundation and area donors. It replaced the temporary structure which needed to be erected and dismantled each year and which had fallen into disrepair. Architect Steve Barstow and Tom Valent from Gerace Construction did the research and developed the plans for the new house. Its stucco and fieldstone exterior, approved by the Historical Commission, helped Santa’s residence blend with the courthouse architecture. It featured a slanted roof for reindeer take- offs and a bay window trimmed for the holidays. The building’s interior was a wonderful mixture of two lofts filled with holiday displays, a fieldstone fireplace, a Grandfather’s clock and a carved chair for Santa. Throughout the house elves were busily at work – truly a joy to behold.

Gerace Construction Company and other contractors eagerly stepped forward when they heard about the project and proceeded to build the house. Under Steve Barstow’s watchful eye and Gerace Construction’s leadership, Blasy Electric, Pat’s Gradall, Haddix Lumber, 4-D Builders, Fisher Sand and Gravel, Brandle Roofing, Ramar Construction, France Electric, Cook’s of Midland, Dow Chemical Company, Ritter Signs, and many anonymous donors made the dream a reality. Once completed the Santa House was given to Midland County. The agreement was that it be made available to the Midland Foundation each year in November, December and January for Santa’s use. In October, the Charles W. Howard Santa Claus School, the oldest and only non-profit Santa School in the world is held for three days in Midland’s Santa House.

In 1997 a Glockenspiel was added to the House made possible by a gift from the Dow Chemical Company in celebration of their 100th Anniversary. Shutters were also added thanks to the generosity of Mrs. Anderson (Dorothy) Arbury.

Because of Tom Valent’s imagination, creativity and direct line to Santa, new displays magically appear each year which allow thousands of children, their families and friends to experience fantasy and excitement. The Santa House is truly a meaningful bit of Midland history. Let us hope that it will continue to bring holiday happiness to all for many years to come. 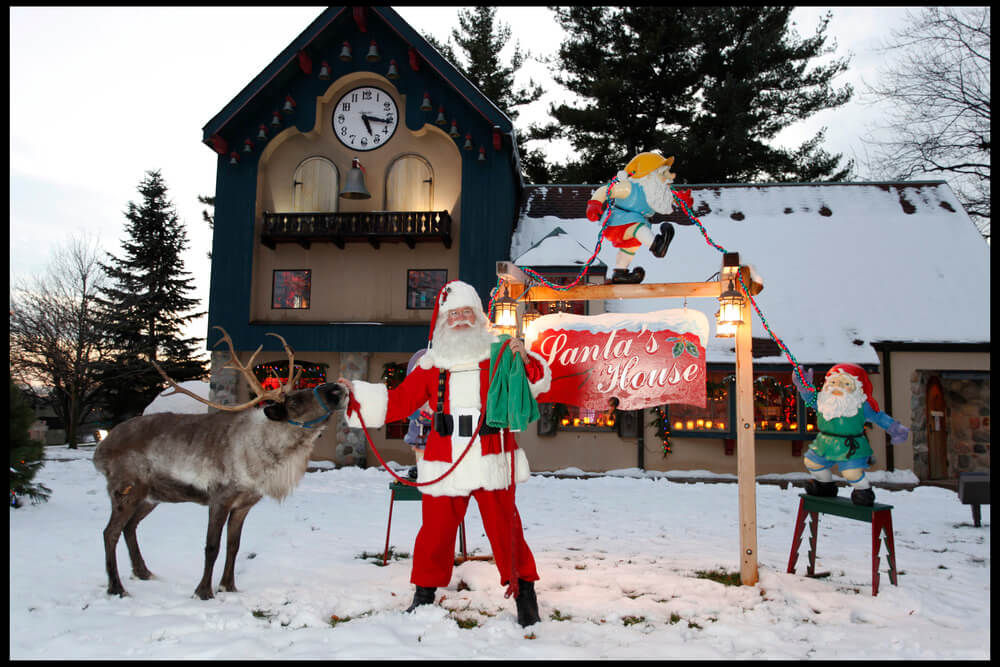